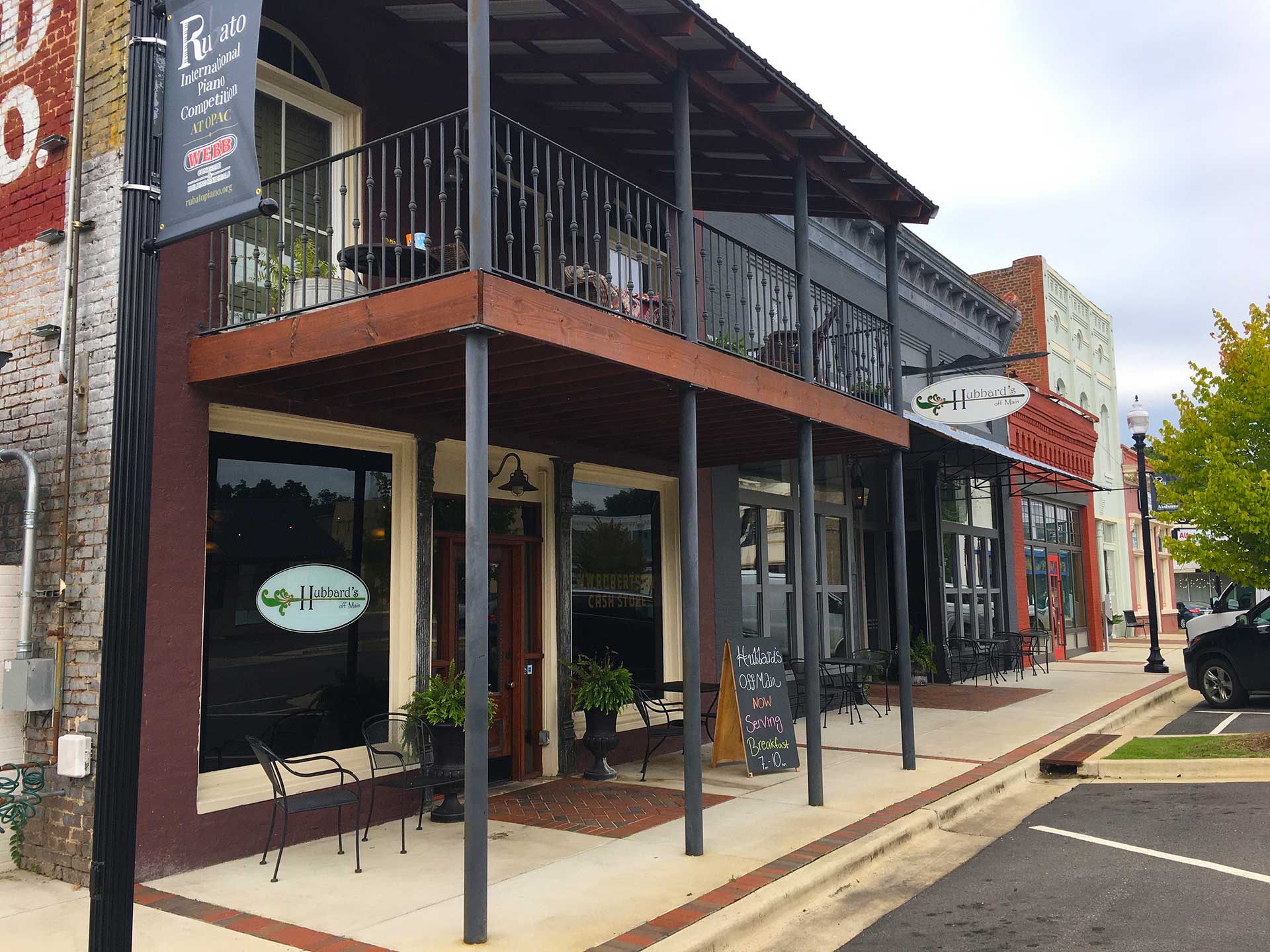 Breakfast (and More) is Served at Hubbard’s Off Main

Since its doors opened in December of 2013, Hubbard’s Off Main has established a reputation for serving savory classic Southern cuisine in a setting that celebrates the antiquity of historic downtown Oxford.  Every piece of furniture, as well as every picture hanging on the original brick walls of the two dining rooms, has its own bygone story to tell.  And who better to relate those stories than the owner, Charlotte Hubbard?  She’s worked hard to create a restaurant that is worthy of the accolades it has received, such as being named among the Anniston Star’s Readers Choice Awards multiple years for categories including Best Buffet, Best Fine Dining, and Best Steak Restaurant–to name a few.

Breakfast at Hubbard’s Off Main

The latest thing happening at Hubbard’s Off Main is breakfast.  Since August 2nd, they have been open Tuesdays thru Saturdays from 7-10 am to serve hearty, homestyle breakfast cuisine that would start anyone’s day off right.

If there’s one particular dish that Chef Jeff Ellis specializes in at the break of day, it’s omelets.  The freshest of ingredients, many from local farms, are featured in multiple varieties of classic egg and cheese based omelets:  Meat & Cheese, Denver, California, Veggie, Steak, and Country.  Depending on the type, you can taste anything from onions, peppers, ham, bacon, sausage, spinach, hash browns, or even country gravy in these delectable dishes.  Charlotte Hubbard shared that her favorite of these is the California omelet, which includes avocado, tomato, onions, peppers, ham, and cheese.

I had breakfast at HOM to chat with Charlotte, and my decision was tough.  I’m an omelet lover, but I’m also a huge fan of biscuits and gravy, so I finally settled on the Combo Plate which included two eggs (I was not sorry to have chosen scrambled–they were delicious), sausage or bacon, and a biscuit and gravy.  The biscuit and gravy was top-notch, so my only disappointment was in not ordering two complete meals (an omelet will have to wait for my return visit).

Charlotte enjoys collaborating with local businesses, so you can taste the luscious Eastaboga Bee Honey on a biscuit in the HOM Breakfast Special.  And she has teamed up with Southern Girl Coffee just across the street, so that their classic coffee brew will be served at Hubbard’s Off Main during breakfast hours.

The Best in Fine Southern Cuisine

Charlotte Hubbard admits that HOM has an ace up its sleeve–they’re revered local chef Jordan Smith, who just celebrated 5 years on their team.  She has developed the menu with elevated Southern comfort food, popular sandwiches, unique salads, and decadent desserts that rival any restaurants in Calhoun County.

Her admiration of Chef Jordan’s cooking skills was apparent, as Charlotte told me, “I used to eat at chain places, but once I started eating the food here, especially since she came, the other places–they’re not even close to the food that she [Chef Jordan] puts out there.  It’s just unbelievable.  She has a unique talent for mixing flavors, where they turn out just right.  One of the judges from the piano competition [at OPAC], who was from Colorado, was asking us how we made the bacon jam.  I gave her a container of it to take back to Colorado with her.”

A popular favorite with Oxford locals is the Sunday Buffet, which runs from 11am-2pm (11am-3pm on special holidays i.e. Mothers/Fathers Day) and costs $18.  Customers bring their plates and are served by staff at the bar, which includes two meat choices, 5 or 6 vegetables, salads, and desserts (located atop the antique piano in the main dining room), as well as tea or coffee.  Besides side items featured on their main menu (mashed potatoes & gravy, collard greens, fried okra, pinto beans, macaroni and cheese), the chef includes some specialty items such as her popular fried cabbage.

Another business that Charlotte enjoys collaborating with is OPAC (Oxford Performing Arts Center).  HOM often caters the food for visiting performing artists, such as the Little River Band, who performs Friday August 18.  On OPAC event nights, ticket holders can benefit by dining at HOM, as they feature a special buffet to help patrons dine more speedily than off the formal menu.  The special evening buffet is $17.

A Legacy Lives On

There’s a lot of history and memories surrounding the two main buildings, located at 15 and 16 Choccolocco Street, that make up the dining rooms of Hubbard’s Off Main.  Going way back, the building where breakfast is served (and the original dining room for the restaurant) dates back to at least 1898, when a local doctor and his wife lived there.  Later in the 1940’s and 50’s (possibly 30’s), a Mr. Robertson ran a cash store there.  And locals may remember, decades later, that Charles Hubbard opened a Music Hall there to support local musicians (myself included).

In the neighboring building where guests dine for lunch and dinner, there’s a photo enlargement of old Choccolocco Street in Oxford, (the original photo) given to Charlotte by relatives of the Gwins.  The Gwins were known to run a dry goods store there beginning in 1902.  Leading up to the restaurant conversion, the building housed Hubbard’s Music Store, run by Charles Hubbard, for over 30 years.  Charlotte keeps the legacy of music alive in that building, not only with antique instruments strategically placed for locals to admire, but also with live music on Friday and Saturday nights.  Recent artists that have graced their stage include Robbie Jordan, Ryan and Missie Robertson, and Joy and Charles Davis.

Hubbard’s Off Main is also creating new memories for folks in Calhoun County and beyond with their availability to host private functions by reservation.  They’ve hosted family events like reunions, anniversaries, baby showers, and birthdays.  They even have an outdoor building behind the restaurant for those that enjoy that open-air feel.

Charlotte added, “Our location, although this is definitely a destination point (you’ve got to look for us),…we get a lot of Saturday traffic from the interstate, when they Google us, so that has helped [our] traffic.  So many people are looking for a local flavor, not a chain–they want something they can remember.”

Memorable–that is a perfect word to label the experience you’ll have when you visit Hubbard’s Off Main, located at 16 Choccolocco St in Oxford, Alabama.  For more information, you can call 256-403-0258 or email hubbardsoffmain@mail.com.