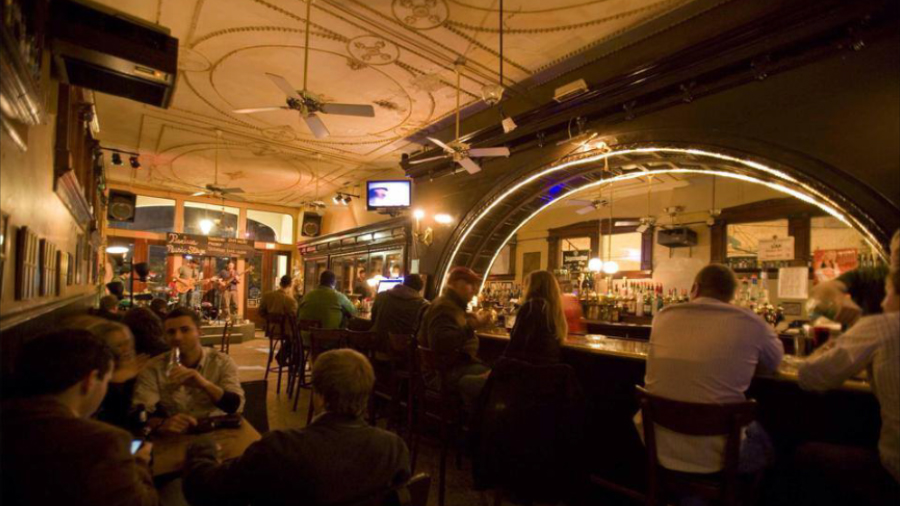 The Peerless Saloon and Grille

The Peerless Saloon and Grille, located at 15 West 10th Street is one of the best restaurants in Anniston, Alabama. It has been a historical attraction that has been a part of the entertainment scene in the city since 1899 when it was established under the proprietorship of Robert E. “Daddy” Garner. Garner operated the saloon until his death in 1919. Though the building sat dormant for a time, it was added to the U. S. Department of the Interior’s National Register of Historic Places on October 3, 1985. Through the hard work of proprietors Wilbur “Dub” Nolen and Kristy Farmer, The Peerless Saloon reopened its doors for business on May 13, 1992. In 2009, the Peerless Grille was opened adjacent to the saloon and has been serving quality food and beverages ever since.

Since its opening, the Peerless Grille has become a favorite Calhoun County restaurant. The diverse menu offers distinct southern cuisine choices, such as fried green tomatoes and a classic beans and greens platter, blue plate special style. There is the option to taste an authentic southern catfish or gulf shrimp Po’ Boy sandwich, and they also offer rotating daily specials that are posted on their blackboard. Steaks, tacos, burgers, chicken tenders, various sandwiches, and a variety of salads are also freshly prepared and made to order, providing options that may not be found on an ordinary menu. Add to this a side menu that includes southern staples such as sweet potato casserole and fried okra, and it becomes apparent why the Peerless Grille enjoys the success and acclaim it has garnered. The Peerless Grille has won the Taste of Calhoun County and Anniston Star Readers Choice awards eight times, an impressive feat for an establishment that has been open for business for eleven years. And if you need quality catering, The Peerless Grille can accommodate your needs as well. The Atlanta Room and Annie’s Attic are available for private events, or if you choose, they will bring their catered items to you.

The Peerless Grille has its own bar in the restaurant and features daily specials.  On Mondays, $3.00 wells are the drink of the day.  Tuesdays feature $3.00 domestic beers and Fireball Whiskey.  Whiskey Wednesdays feature $4.00 whiskey.  Thursdays are $4.00 draft days, and the specialty for Friday and Saturdays are Melon Punch and Long Island Iced Tea.  And as a full service bar, the Peerless Grille offers bottled and draft beers along with a variety of mixed drinks and cocktails.

Over a relatively short period of time, the Peerless Grille has established itself as one of the premier restaurants in Anniston and Calhoun County.  The ambiance of a building steeped in history and turn of the 20th century decor, combined with the modern amenities of the 21st century, provide the restaurant with an atmosphere that is unique and exclusive to this historic venue.  With its variety of menu items and drink specials, the eatery has become a favorite of local patrons and visitors to the city alike.  If you are looking for a break from the norm, visit the Peerless Saloon and Grille, “Where Everything is First Class!”