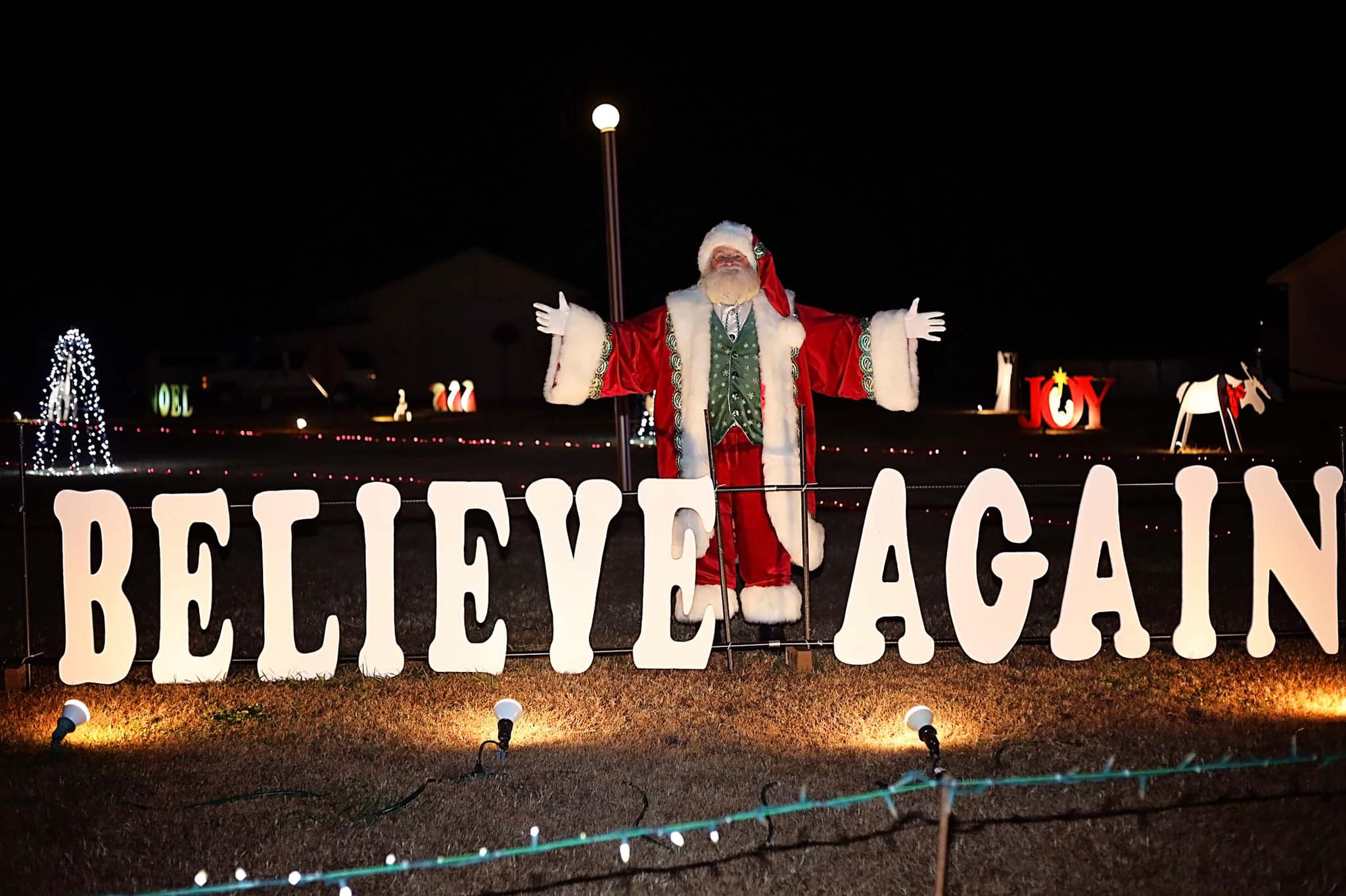 As you drive by the Oxford Exchange teeming with holiday shoppers, and then further on past Choccolocco Park, illuminated with its Festival of Lights, you’ll eventually come across a more unassuming–yet enchanting–yuletide delight.  If you were to continue to where Leon Smith Pkwy becomes McIntosh Rd, and go a bit further around the bend, you’d come upon one of Calhoun County’s best kept Christmas secrets–the festively decorated home of the “Friendship Santa”–also known as Santa Avery Robertson.

The Friendship Santa is certainly not unknown to the locals of Oxford, Alabama.  If you spent a few minutes admiring his collection of light displays and yard ornaments, you’d be startled by a constant stream of honking car horns.  Why?  Because of the invitation penned on his roadside sign that reads, “If you like what you see, HONK! & tell others.”  Passers-by love to show their appreciation of his hard work by obeying the jovial command.  Santa Avery enjoys the audible affirmation, which he shared begins as early as September when neighbors spot the flags he uses to map out his maze of electrical outlets (the cords alone would stretch 1.5 miles, he avowed).

Twenty or more years ago, Mr. Robertson was inspired to build upon the holiday lights he already owned when his grandson reacted with glee upon seeing them.  The toddler declared, “Wow, that is purdy!”  From that point, he added 2-3 pieces a year to the front and back yards of his brick ranch home.  He’s built many of them himself from wood, and also had help from a local metal-worker.

The display is truly impressive.  In front of Santa Avery’s house sits a huge red wooden sleigh led by eight not-so-tiny reindeer.  In fact, the pack is led by a massive Rudolph which towers high above any person’s head–the tips of its antlers reach almost 15 feet!  There are other wooden pieces like animals (a trio of penguins, a giant moose, and newly added polar bears), angels, and a giant nativity scene which greets drivers first as they round the bend.  Other yard ornaments include an automated helicopter flown by a vintage Santa (donated to Mr. Robertson recently by a local), tons of lighted trees, a new commercial grade metal peace sign with baked-on paint, and another new addition–a metal tree crafted with the descending words: Joy, Love, Peace, Believe, Christmas.

Every evening, Santa Avery keeps his garage door open, which is decorated to resemble Santa’s throne room.”  Among the décor sits a wooden rocking chair for him to relax in and greet visitors.

It would be one thing if Avery Robertson were simply a man who liked to go all-out decorating his yard every year for Christmas.  But this man is also the spitting image of Santa.  In fact, he’s so authentic that even in plain clothes, people stop him to ask if he could, in fact, be the legendary figure.  Santa Avery told me that just last weekend he was stopped on the street in downtown Auburn after a football game by folks who wanted selfies with him because he “looks like Santa.”

What’s so special about Santa Avery’s house is that on any given night of the week, you can park and visit with the legend himself.  Santa Avery makes himself available (when not previously booked) to visitors for photos and Christmas wishes from 5:30-8:00 pm nightly in December.  Thanks to local sponsors, he’s able to offer little gifts to children at times like holiday grab-bags with coloring items and small treats.  However, Santa Avery has become so popular with bookings that his evenings at home have grown scant.  According to his current schedule, folks can stop by for a visit on these dates:  December 2, 3 (weather permitting), 9, 12, 17, 19, 21, & 23.  Special events at his home include:  Pet Night with Krisp Pics Dec. 3 (he said rain is in the forecast so it may be canceled); Cowboy Santa Night with Krisp Pics Dec. 10; PJ/Elf Night with Krisp Pics Dec. 20.

Since retiring from the Anniston Army Depot, Mr. Robertson has been allowed the time to really enjoy his Santa role.  With the help of two make-up experts (his wife who’s a professional beautician, and his daughter who learned the ropes styling her daughter for competition dance), Santa Avery goes through prep that can last from 30 minutes to 2 hours.  From his authentic styled beard and hair, to his rosy cheeks, to his splendid classic costume, this Santa looks and plays the part to a tee.  Just last night he was busy appearing at the Munford Christmas Parade.  Other bookings he has scheduled include the Anniston Fire Department, Chick-fil-A of Oxford Exchange, Backyard Dreams, the Legacy Village of Jacksonville, and more.

When he’s not out for a public booked engagement, Santa Avery is often hired to visit folks in their own homes for special times of fellowship and photos.  He said that children as young as 5 days old to adults as old as 96 years have had their turns sitting on his lap.  “I get a lot of enjoyment out of it, and the parents do, too.  I’ve had all ages, and they’ve all had a grin!”  He loves to listen to what they wish to share with Santa Claus.  Some wishes have affected him more than others, like one little girl who selflessly asked Santa to make her parents quit fighting.  He recalled another instance where he stopped by a nursing home to hand out candy canes.  Upon meeting him, an 89 year old woman cried, telling him she’d never had the opportunity to see Santa Claus before in her life.

It’s moments like these that motivate Santa Avery Robertson to continue spreading holiday cheer to the residents of Calhoun County.  If you’d like to contact him for a booking or for more information, you can email Syprinabrown@gmail.com.  His light display is visible for all to see at 5921 McIntosh Rd, Oxford, Alabama.