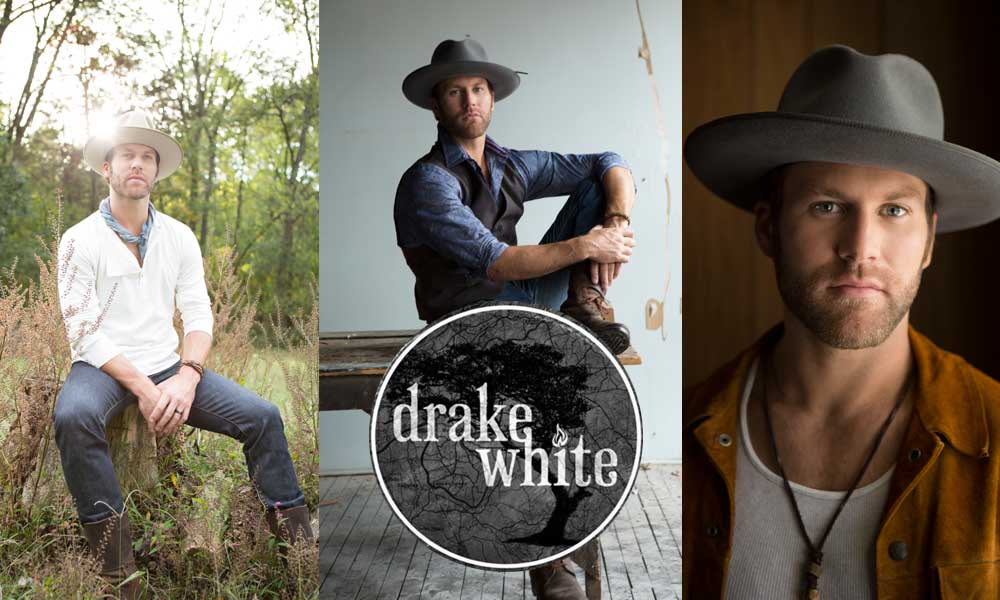 Drake White Ignites The Charts With a Single Spark

“Being from a small town in Alabama is something that I love and always will.” Drake White says he is proud to come from the Heart of Dixie.

The Hokes Bluff native will headline the second annual Knox Outdoors Music Festival on April 21 at Zinn Park in Anniston with his band, The Big Fire.

Since the release of his first full-length album Spark, in August 2016, White has been working on new music which he is bursting at the seems to share with his fans. “We’re about to just bombard everybody with new music,” White says. “There’s so many ideas that we have right now . . . Instead of one album a year I would love to release two or three songs a month and at the end of the year turn around there be 30 or 40 songs.”

White recognizes that people want new music. He says, “They listen to one or two songs and then they’re over them . . . and they’re on to the next thing. I want to have the next thing up there.”

White’s plan to provide fresh tunes is set to begin in the month of April. He says, “Every couple of months we’ll release new music. Whether it be three songs, maybe two songs, four songs.” In fact, we could see as many as five new songs from White in the coming weeks on Spotify and iTunes.

Spark which included hits like “Makin’ Me Look Good Again”, “It Feels Good”, and “Back to Free” gave us a glimpse into the brand that White is building, and his new music promises to continue that message of sitting around a fire and enjoying the simple, beautiful things in life.

White says he’s like “a hamster on a wheel” when it comes to writing new material. “If I see a tree I’ll rhyme tree 50 different ways: tree, bee, sea, believe . . . I used to drive my poor mom crazy and drive my wife crazy now because it’s all about rhyming and about making things make sense, and they’re all puzzles.”

Talking about his new music, White says “I’m going to be proud of my family and put their mess ups and screw ups in there too . . . You go to anybody’s Thanksgiving dinner table and you realize that everybody’s got a crazy uncle Bob or crazy aunt Marcy or whatever it is, and those people are in my songs. I think that’s what makes music real.”

While White’s music is relatable and easy listening, his lyrics tell a deeper story than what’s on the surface. For example, the line “Nobody’s talking but we’re all on the phone” from “Back to Free” paints the familiar picture of a room full of people with their noses stuck in their phones.

White says we need to “disconnect to reconnect”. “I think the coolest thing in the damn world is to cut your phone off and build a fire and sit around it with your dogs or your wife or your kid or significant other and tell stories.”

That image of family and friends sitting around a fire is the basic concept for the brand White is creating. “We’re so fast-paced now . . . I think it’s important to slow down,” he says. “Look at all the stuff we’re dealing with psychologically that we didn’t deal with 20 years ago . . . It’s so hard to be truly happy in this world. I’m looking at kids that are 13 and 14 that are my nephew’s age and they got all this stuff they’re competing with . . . it’s just like, just chill out. Get on your 4-wheeler and go ride and go fish and go figure out how to catch a squirrel and that’s the music.”

“I would love to have a hit, a huge hit on the radio, but I want to build something bigger for the Kingdom and myself,” White says. “I can’t wait ‘til that day where my platform is big enough to where I can go out there and start music programs – and that don’t have to wait, that’s what we’re doing now – but I’ve watched Zac Brown do some pretty massive stuff in and around the state of Georgia and that’s what I do it for. I love it.”

White has partnered with organizations like Homes for Homes and Habitat for Humanity to give back to people who need help, and with a degree in building science from Auburn University, he says it’s a passion of his because “everybody needs a roof over their head”.

Another passion of White’s is volunteering with the Boys and Girls Club. “I have a huge passion for young boys and girls and just teaching them how to build a fire, how to catch a fish, how to pitch a tent, how to cut a tree down with a chainsaw, how to cook a pancake breakfast. That was stuff that I took for granted because my grandfather and my parents taught me . . . and kids don’t know it.”

White shared with me his dream of one day hosting a Wild Kids Camp. “I’m going to have a common sense course one day and I’m gonna have a big compound out here and just invite thousands of kids and show them how to make a G chord on a guitar, and if they have a video game out here I’m gonna make them run five miles or something,” White says. “It sounds like I’m kidding but I’ve really thought of all this and it’s part of the brand. The brand is sitting around a fire.”

White’s energy on and off stage is infectious. When he’s performing it spreads through the crowd. You could even say that White, himself, is the spark that ignites the crowd, and he promises to bring that same energy to Anniston. “I love the fans. I’m a servant to the fans. Im theirs when I’m on stage and I love being that, taking that role.”

“My dad worked at Goodyear and my mom just retired from Ayers, the Gadsden State Technical College in Anniston. [They] worked really hard for their money so I just feel like if somebody’s gonna pay 10, 20, 40 bucks to come out there and see a show, our motto is 10 or 10,000,” White says. “People deserve to be jolted, they deserve to be taken out of their hurts and their bills . . . they deserve to come out and have a damn good time.” White believes it’s his job as a musician to provide that escape for people. “I wear that badge very proudly, sometimes to the point of a little too much excitement,” he laughed.

Off stage, White is down to Earth and as easy to talk to as an old friend. Underneath the hat and behind the voice is a man who was born in Alabama, who is making music that matters, and is helping people every chance he gets.

White says he “learned life’s lessons around the orange glow of a fire” and that is now his brand. “What can I teach you about a fire? Oh my friend, I can teach you a lot.”