In the Spotlight: Steve’s Rare and Vintage Guitars

Like the Eagles, who famously crooned, “There’s a new kid in town,” we at Calhoun County Insight would like to spread the word about a unique new business opening its doors Friday, July 1 on Noble Street in the heart of historic downtown Anniston.  Steve’s Rare and Vintage Guitars is much more than just an average music store.  Steve Fambrough is an aficionado of vintage music equipment and instruments, having slowly built up an impressive collection over a lifetime.  Now he’s taking that thing that has brought him lifelong joy and sharing it with the residents of Calhoun County and beyond.

For his unassuming manner, you wouldn’t guess that Steve has an interesting background, beginning with being the son of a 70’s classic rock musician.  He grew up surrounded by electric guitars, equipment, and other music gear.  He began cultivating his own growing passion for music by taking up the guitar at age 12, working at the famed Turtle’s Records and Tapes in the late 80’s, studying recording engineering in college, and eventually opening a recording studio. And over the years, his collection of instruments, gear, and vinyl albums grew.

When prodded about his musical influences, Steve admitted, “I grew up when hair metal took off.  [Bands like] Def Leppard, all the “W” bands–Winger, White Lion, Warrant…but I was also hugely influenced by classic rock of the 70’s because that’s what my dad did.  Anything with guitar, I’m interested in…bluegrass players are also amazing.”

While Steve is definitely the “gear guy,” his wife, Renee Flournoy is also a music lover, and the in-house expert on vinyl albums.   “(Renee) is a musical dictionary–she knows more details about bands than most people.”  Between the two of them, they eventually had a residence packed full of their vintage music collectibles and memorabilia ranging from family heirlooms to rare finds obtained on weekend jaunts.

“I was just in that world for a long time.  I’ve been accumulating things over the years.  We finally decided, hey, you either need to sell all this stuff or open a store or do something with it.  Everything you see in this building was in my living room, in my dining room.” 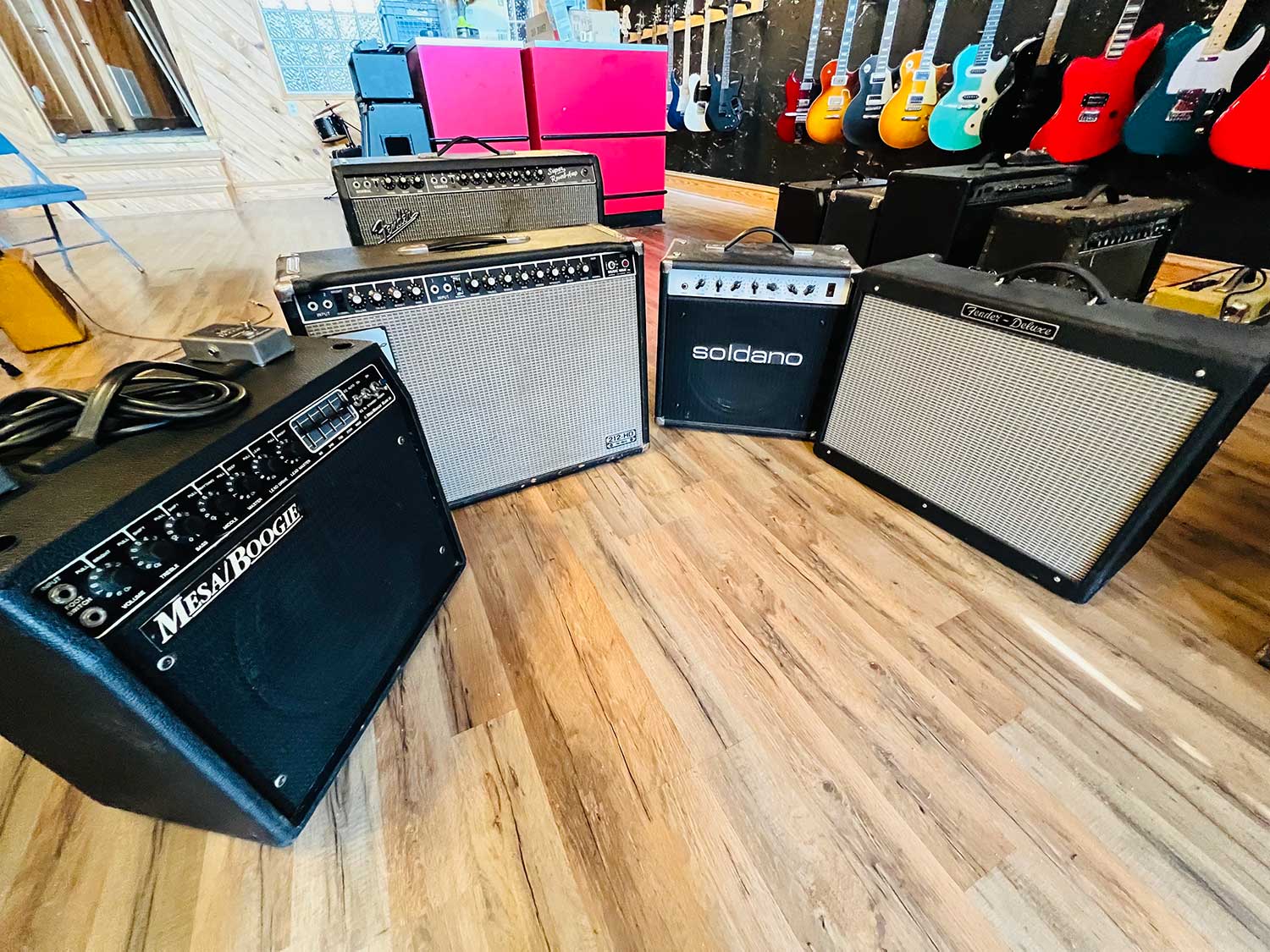 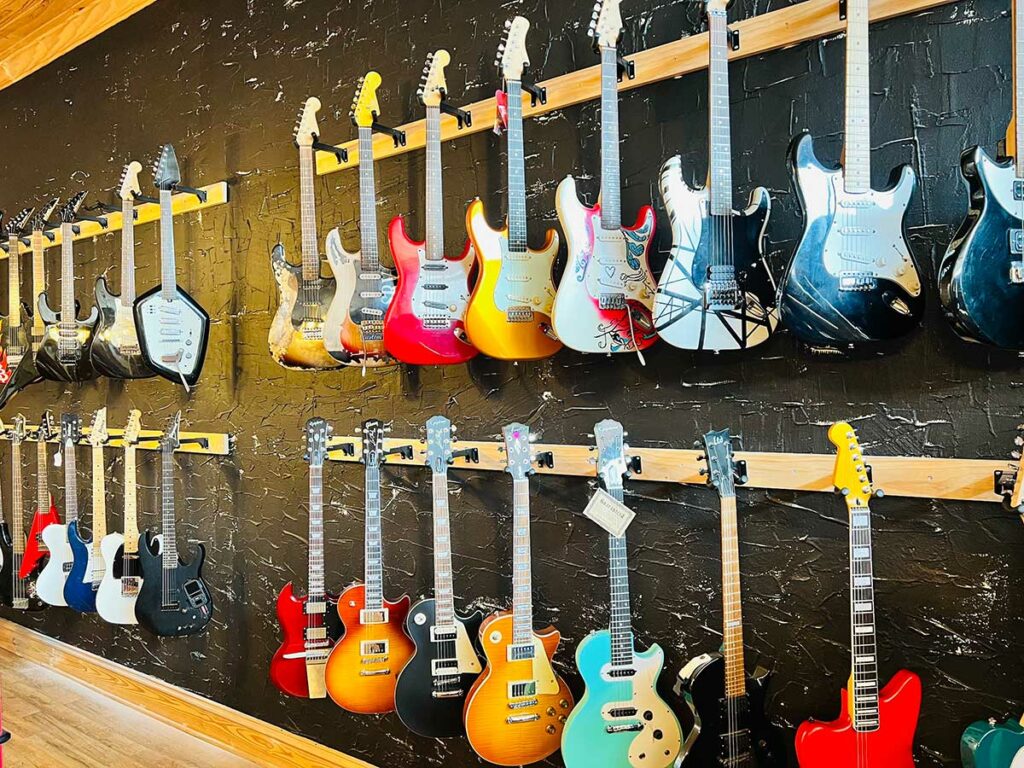 The “stuff” Steve is referring to includes vintage Gibson, Fender, Marshall, Martin, and other brands of electric guitars, already going up on the walls of his newly purchased storefront at 1211 Noble Street.  And on the floor sits an array of classic Music Man, Marshall, Fender, and Peavey amps, some flaunting the dust of their ages.  “We’ve got about 100 guitars going on the wall.  I’ve had most of them for many years.  But of the 100 guitars, I always grab that ‘one’ to play myself,” he joked.

Besides vintage guitars and gear, this new store will carry other stringed instruments like keyboards, mandolins, bass guitars, accessories, and specialty T’s sporting his new custom-designed logo.  While he’ll carry some limited “new” merch, the focus will definitely be on the “old,” even down to guitar effects pedals, which he said are skyrocketing in value since the pandemic because of the precious parts inside of them

“The pedals really aren’t that old–I’ve got one that’s 5-6 years old that I paid $150 bucks for….it’s now selling for $1,200 because you can’t get the secret guts that are inside of it anymore.”

Classic vinyl albums will be a special featured item at SRV Guitars.  Steve shared that most people think the classic 60’s and 70’s albums, such as Herb Alpert’s Whipped Cream and Other Delights are the most collectible.  But what he and his wife seek when they visit obscure vinyl stores up to 500 miles away are the vinyl albums of the mid to late 80’s, when companies were stopping the manufacture of them.  His new store will buy and sell those, as well as the older classics, and even vintage 45’s.

His son will be taking up the rear with the beginnings of a comic book collection.  Being a part of the broader “collector community,” Steve believes his store will bring visitors to downtown Anniston that wouldn’t normally visit.  He’ll also be focused on online sales with his soon-to-be-launched online retail space.

Sales from instruments and other collectibles aren’t all that Steve Fambrough is seeking.  Besides providing instrument and equipment repair at his store, he wants to aid in cultivating the music scene in Anniston and surrounding cities.  He’s already securing private music teachers to offer lessons in guitar, piano, and other instruments at his store, and would even like to host some music fantasy camps.  He’ll also be setting up equipment from his former recording studio in Birmingham to take on recording projects.

The key to any music scene, of course, is live music.  That’s another item on Steve’s bucket list for SRV Guitars–featuring live music in the back room, where a nice raised stage area already exists.  He admitted there was some red tape involved in getting that off the ground, but he envisions possibly having a food truck or two in the rear parking lot to accommodate evenings of special concerts, or having a BYOB policy.  From bluegrass bands to acoustic ensembles, Steve sees his stage best suited to solo, duo, and trio acts.

Steve believes whole-heartedly in supporting the surrounding music venues and other live music hosts in the area, and wants to aid in making sure everyone is aware of what’s happening in the current Anniston/Oxford music scene.  He lamented that oftentimes music events aren’t publicized as thoroughly as they ought to be and slip through the cracks unnoticed.  “There was a show in Birmingham Saturday night–Collective Soul, a big band from the 90’s.  They played the Birmingham Zoo and 20 people showed up.  And that’s probably a $10,000 guarantee to even get them there.  And NOBODY knew about it.  I’ve got all the radars you can have and I didn’t know that show was happening.”

In the ever-shifting music industry, there’s been a lot of adaptation taking place, especially after the blows inflicted by the pandemic.  There are countless cities that will always be in need of individuals who care about cultivating the arts, and our town is no exception.  It’s our sincere hope that Anniston will welcome Steve’s Rare and Vintage Guitars with arms opened wide.

Be sure to stop by for their grand opening Friday, July 1 at 1211 Noble Street, Anniston, Alabama.